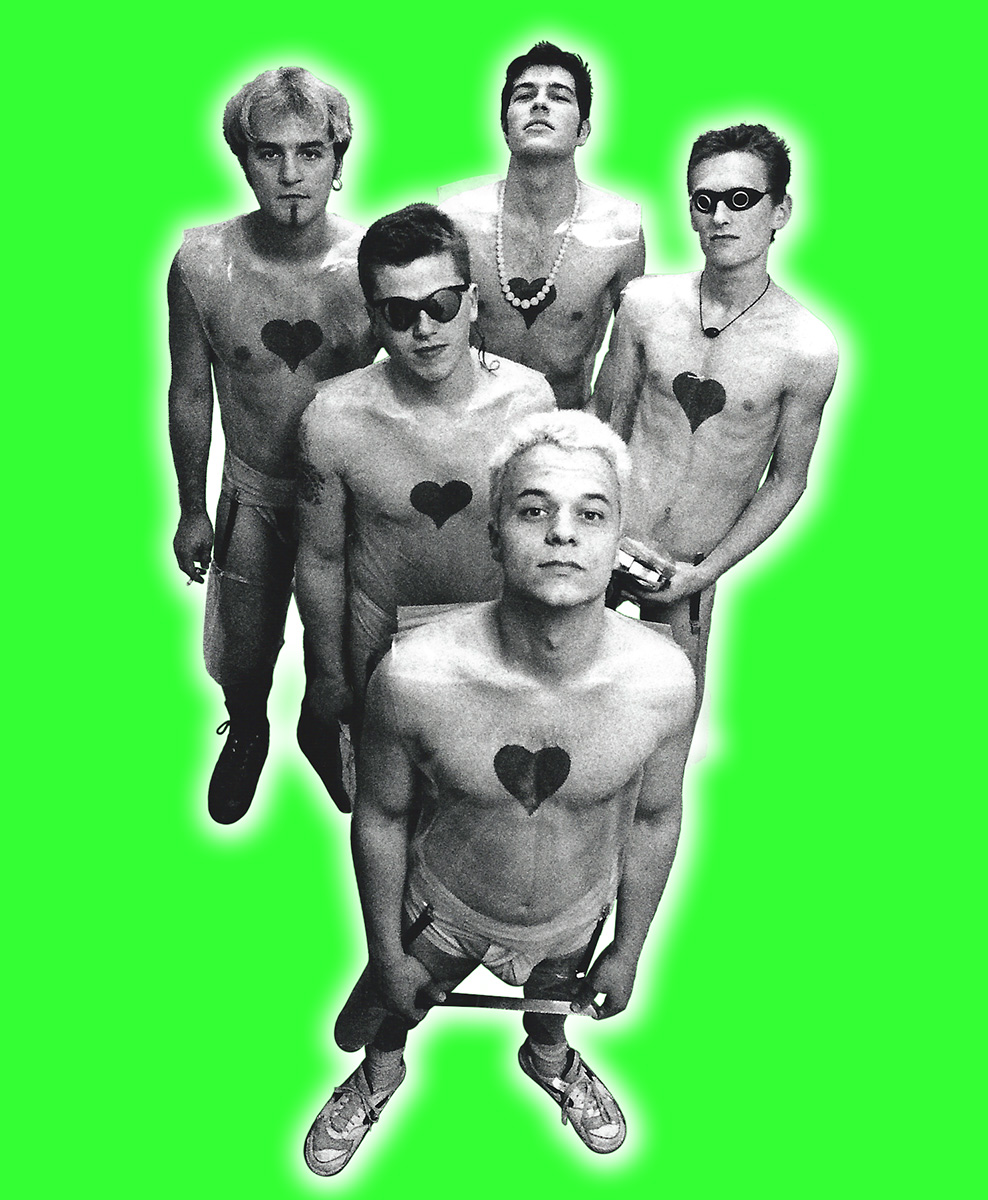 those were the days...

a long time ago i was in graphic-design-school with oliver rihs. he had heard my FIRST EXERCISES and asked me if i could record his punkrock-band IN DER TAT. i started to see some concerts of them and liked the guys a lot. they were very funny and comical, but there was some kind of tragedy in the music as well. the perfect mixture...

so i took my fostex 8-track-tape-machine to their bandroom in dübendorf and rented some microphones to record the drums. i've never done this before and it's quite a challenge to place all the right microphones at the right spot. we needed also a mixing-desk to reduce all the mikes to 2 channels - stereo left and right.

we then recorded the drums and the bass together to maintain at least some sort of live-feeling. more was not possible because of our limited equipment.
when these sessions were finished, we recorded the guitars each seperately on one track. then came the vocals. the funny thing with oli was that some of the lyrics were unfinished, so we had to translate it first from german to english... in the live-situation nobody seemed to notice that on some parts he used to actually sing gibberish. but for the CD he thought it should at least make some sense... ;) .. i think it does a lot...

some last guitar-parts by dani pleisch were done when i already had moved the equipment back to my parents home, where i lived at the top floor. there i started to mix all the songs which is quite some task and took me a lot of time. i had finished my apprenticeship as a graphic designer and was just out of work, so i had the leisure to do it.
with the kind permission of the band i added some synthesizer, keyboards and other effects to enhance the songs.

i mixed each song over olis analogue mixing-desk straight to DAT (digital audio tape - this was the time before everybody could burn CDs...). after a few months, when i was finally finished with it, and i finally had everyone's approval, i compiled the songs in the desired order to a second DAT for the right song-sequence, as it should appear on the CD. we looked for the cheapest place to press 500 CDs while oli made the artwork. i think we ended up pressing them in austria. i was happy that it was over. the sound-quality was not that good - but neither was the playing... and some said, we would have been better off, making a live-recording. but nevertheless it was a great experience and i'm still proud to have known, and later even have become a part of that band. 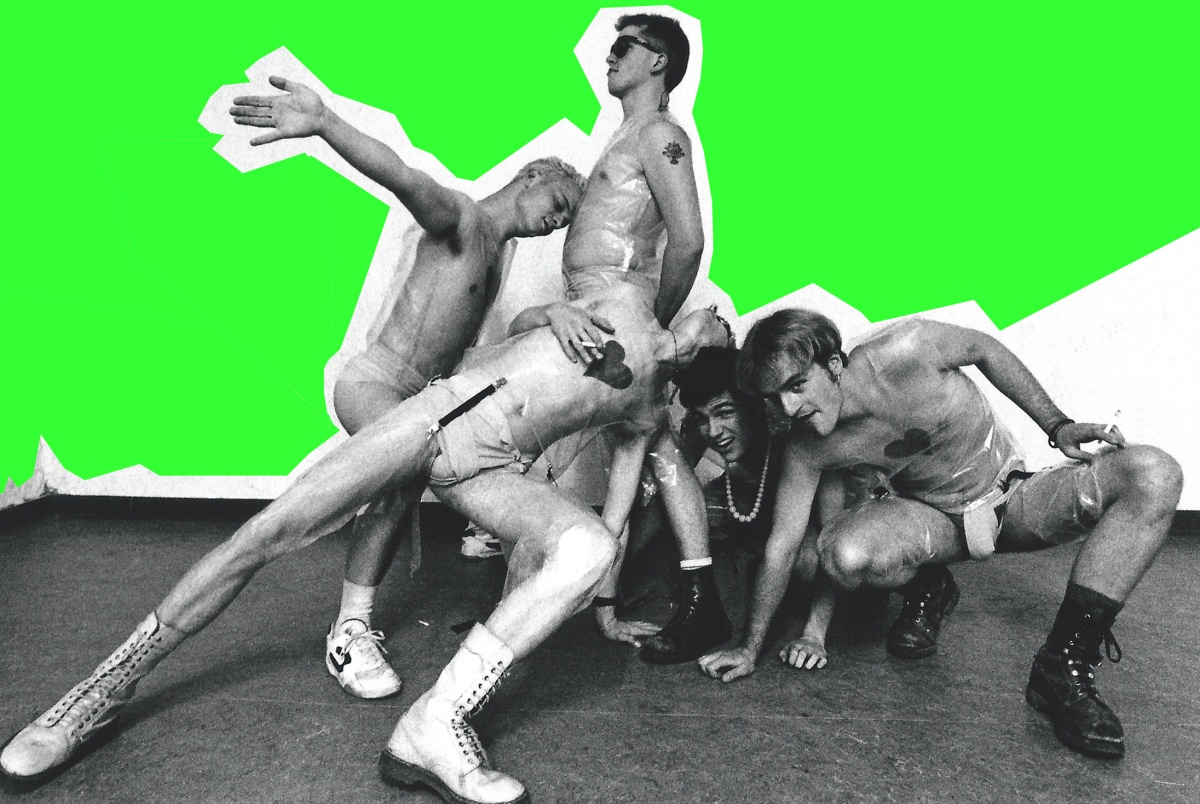 right after the CD was finished dani pleisch and marcel delavy quitted the band. so with the two guitars gone they had a hole to fill. so oliver nanzig came in as a replacement-guitarist. and i did some lines on my synth... i was so enchanted with the guys that i wanted to stay in the band. so i became an official member and we did some funny concerts later in the year. we also wrote some great new songs but they're lost in history since we don't have any recording of them, i think.
every show we did had it's special theme and incorporated weird theatrics, painting and dressing up. the props and ideas came mostly from alex who invested a lot of time to paint rabbit-armlets, sew plastic stockings and shirts or create other out-there-things. during our concert in DYNAMO he smeared honey on his naked body and let the feathers of a pillow ripple over him as if he was tarred and featherd... crazy guy! i love him... ;)
we were painted in color, head to toe, shocked and embarrassed the crowd with carrots in our trousers and showed our naked asses with rabbits painted on them in Café Zähringer. our, so to speak, artistic peak was when we made a show themed "isolation" when we played behind a plastic wall which we later tore down in Jugi Uster. and we even played in fine suits in an occupied building, called TAROT, just to be sort of wierd and out of place.

we also did some unplugged-concerts in rüschenhemden, where i used to play the melodica, a small keyboard, sounding like a harmonica, with a mouthpiece to blow air into.
and we also rocked the Jungbürgerfeier in Uster, as the officially hired party-band.

isolation: the stage behind the plastic wall. 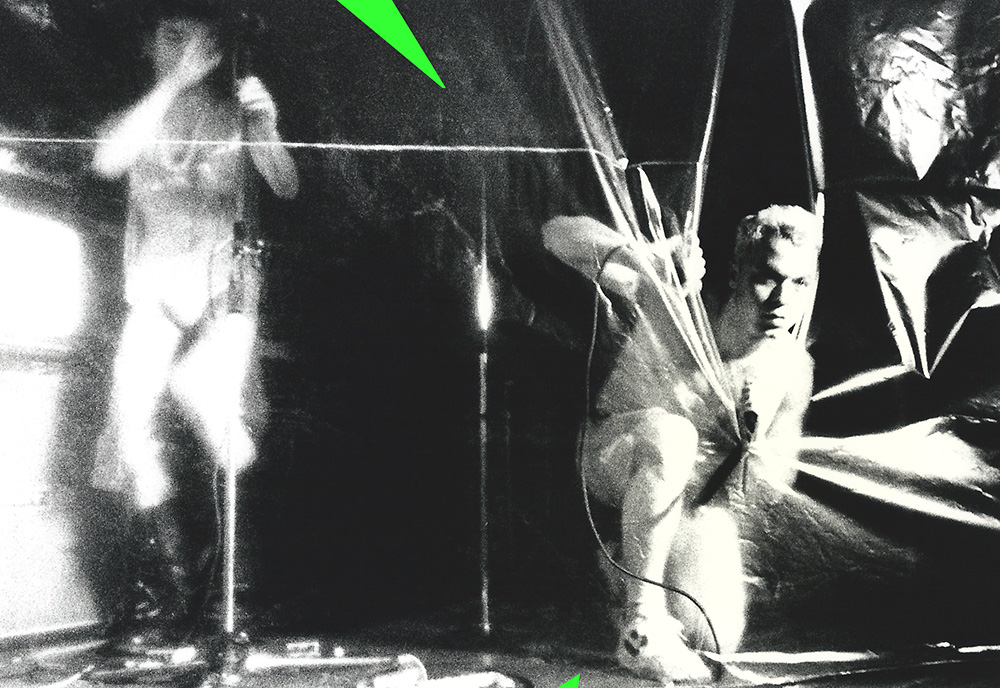 breaking out of the isolation. 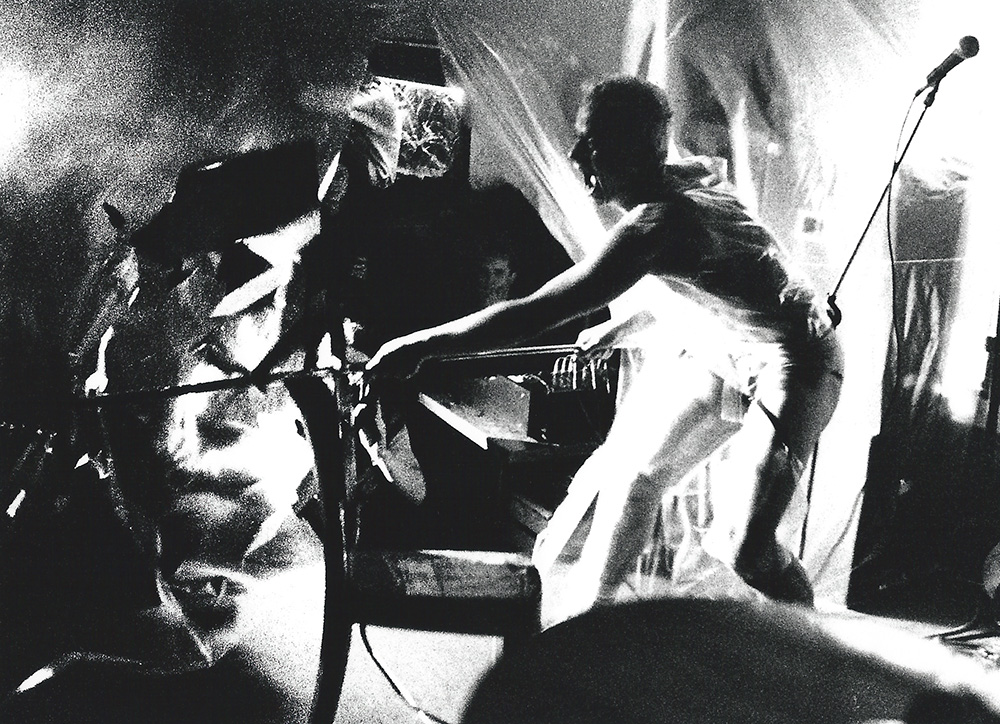 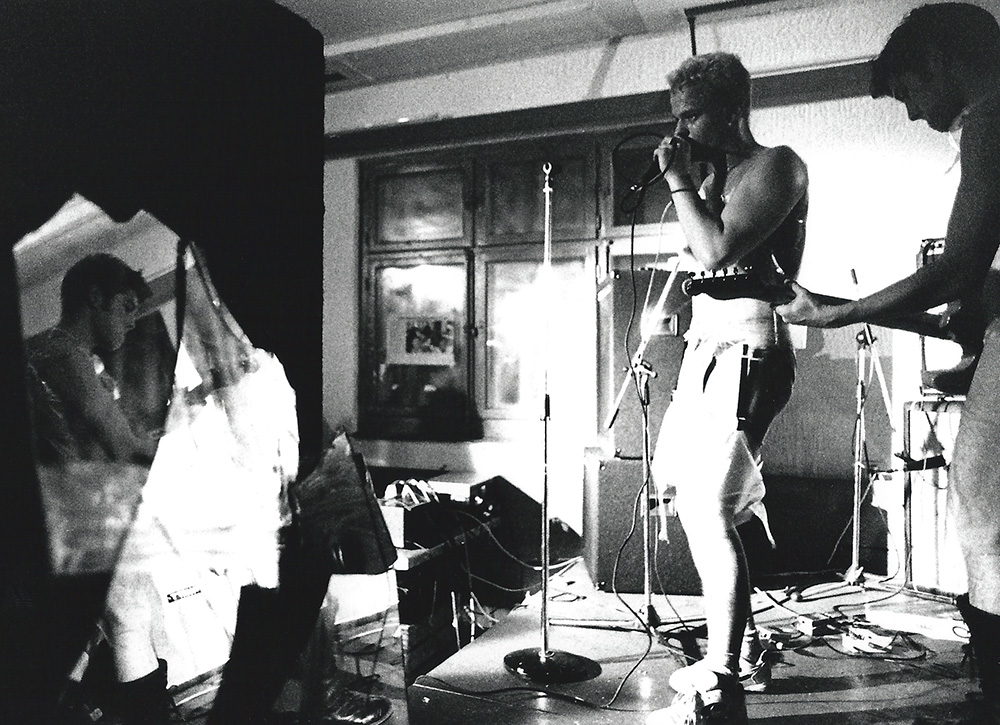 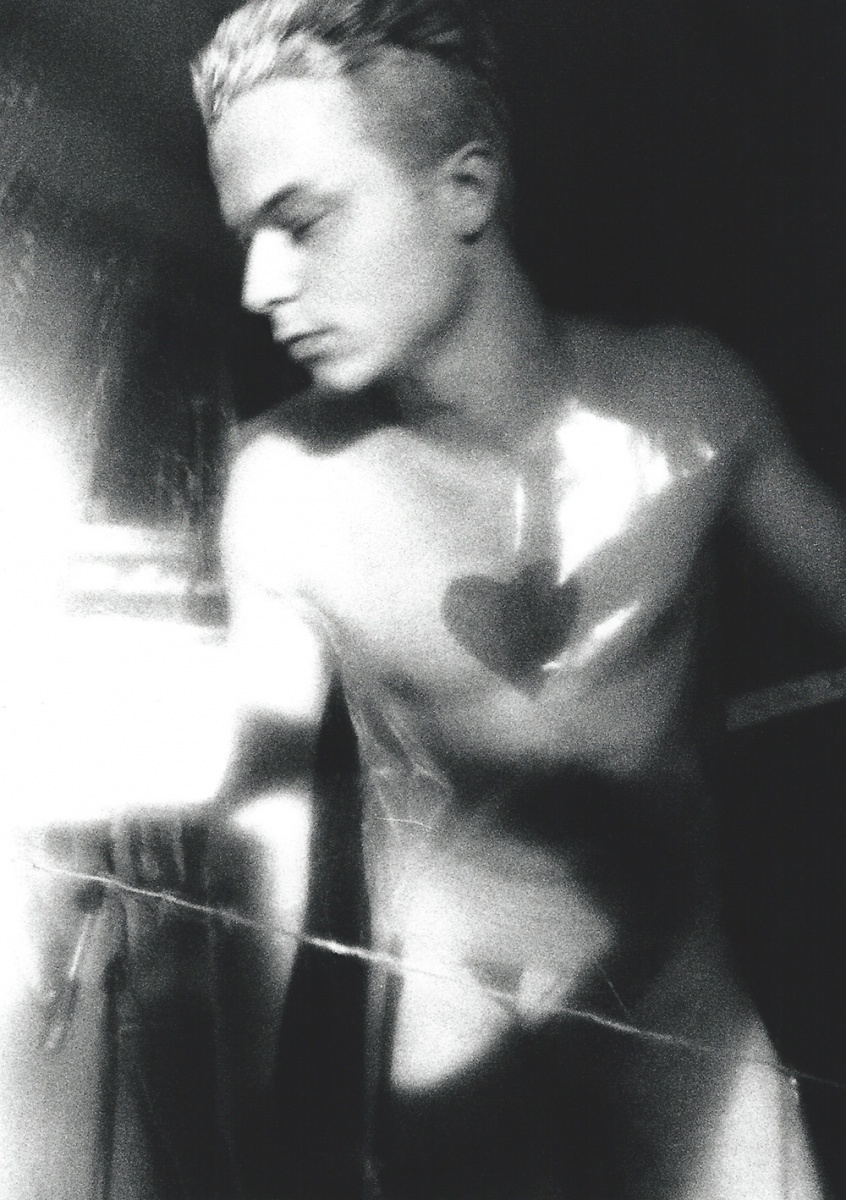 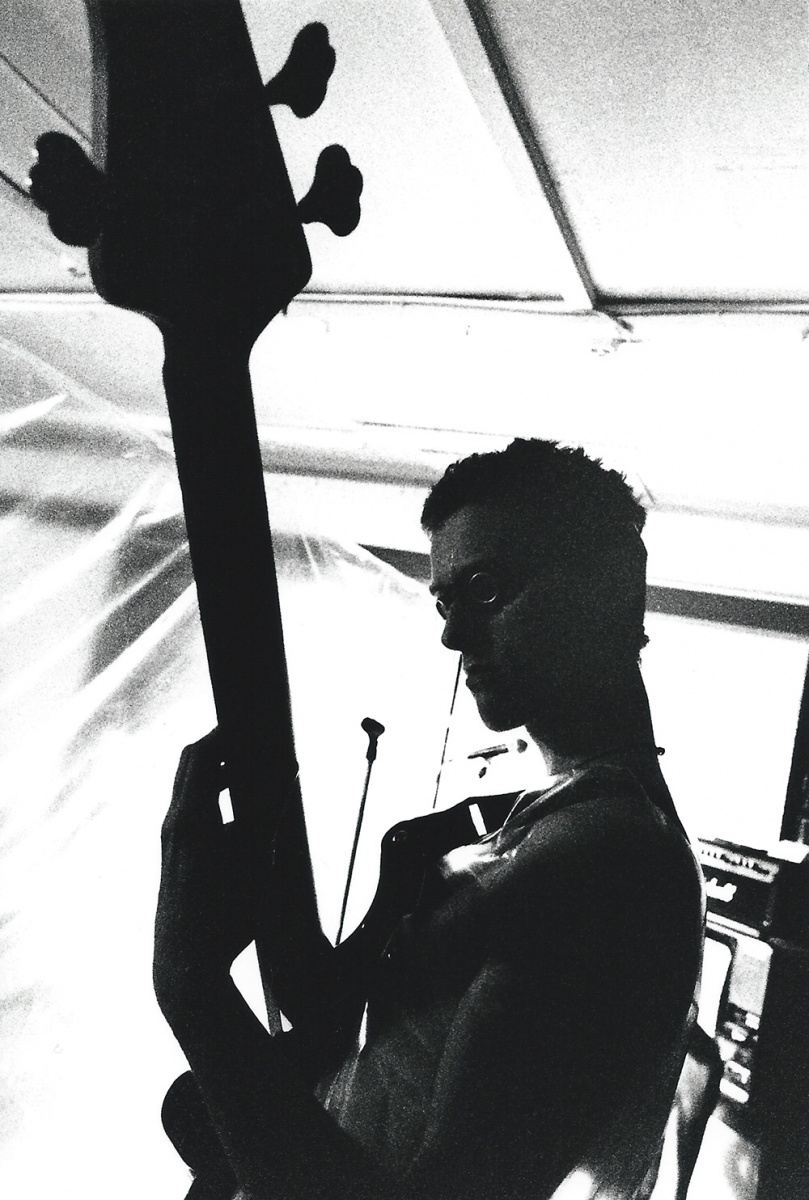 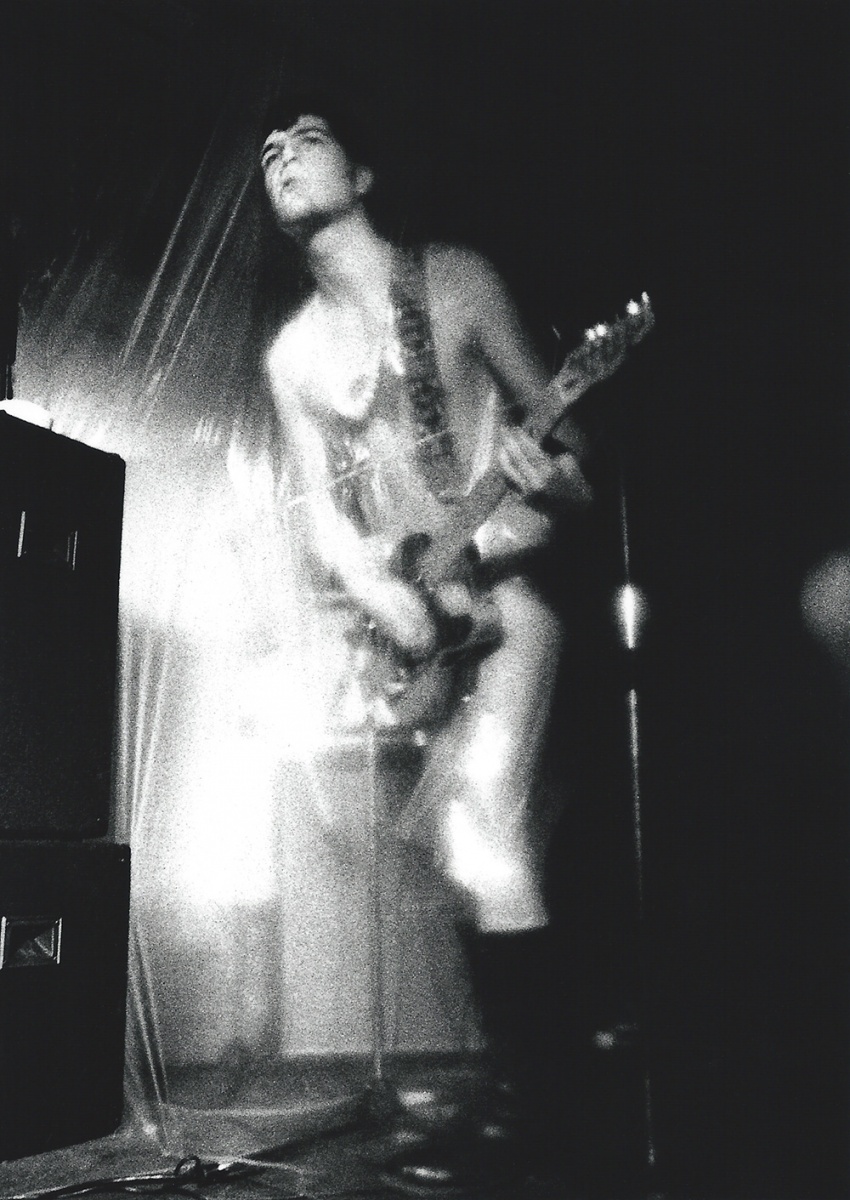 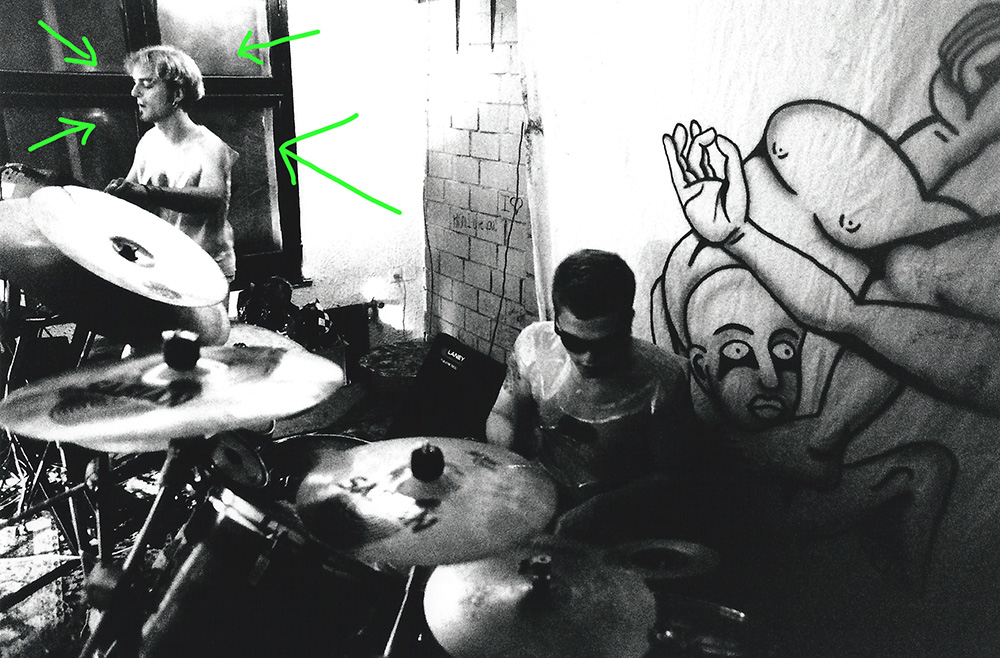 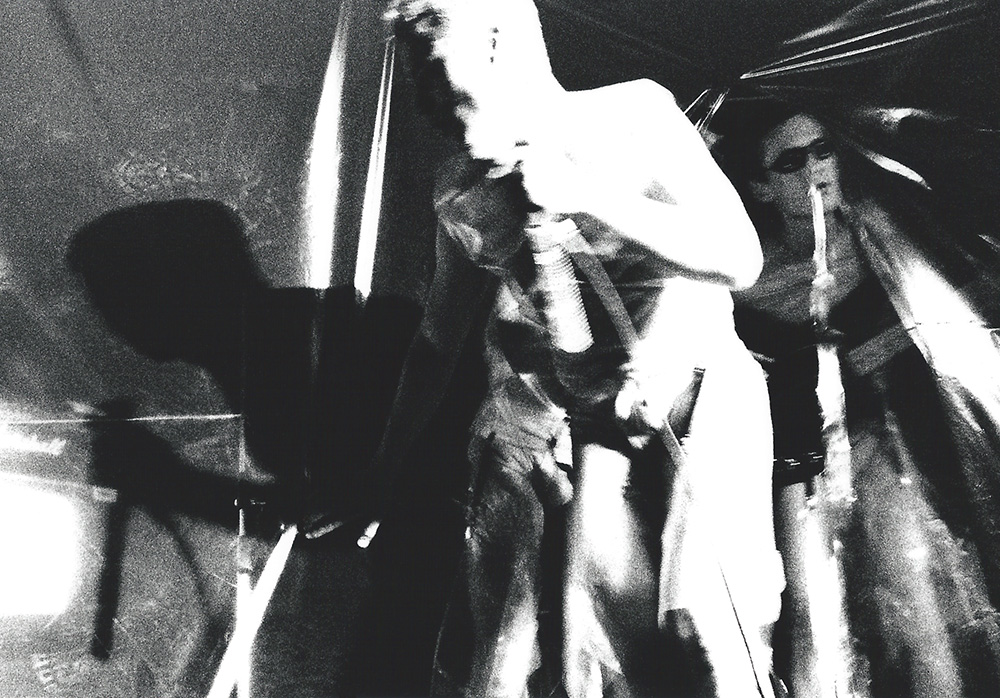 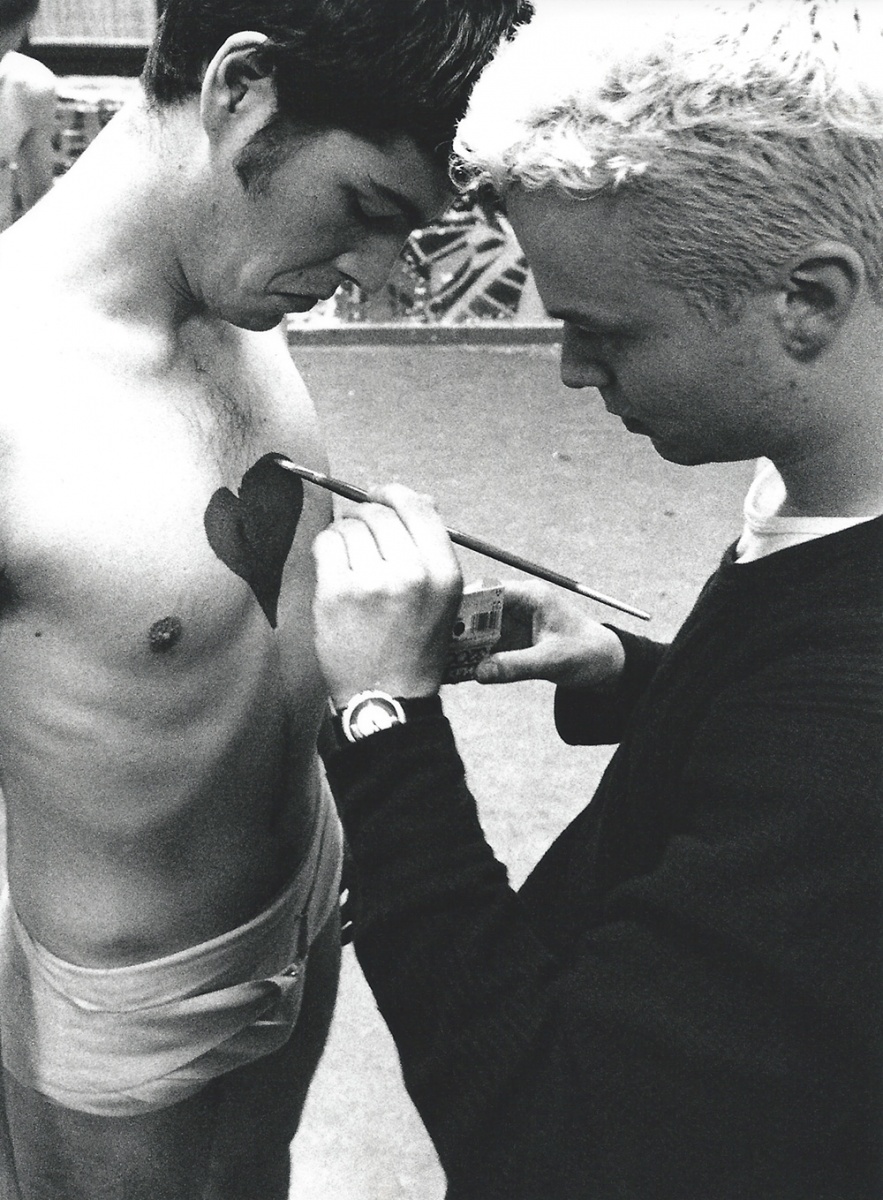 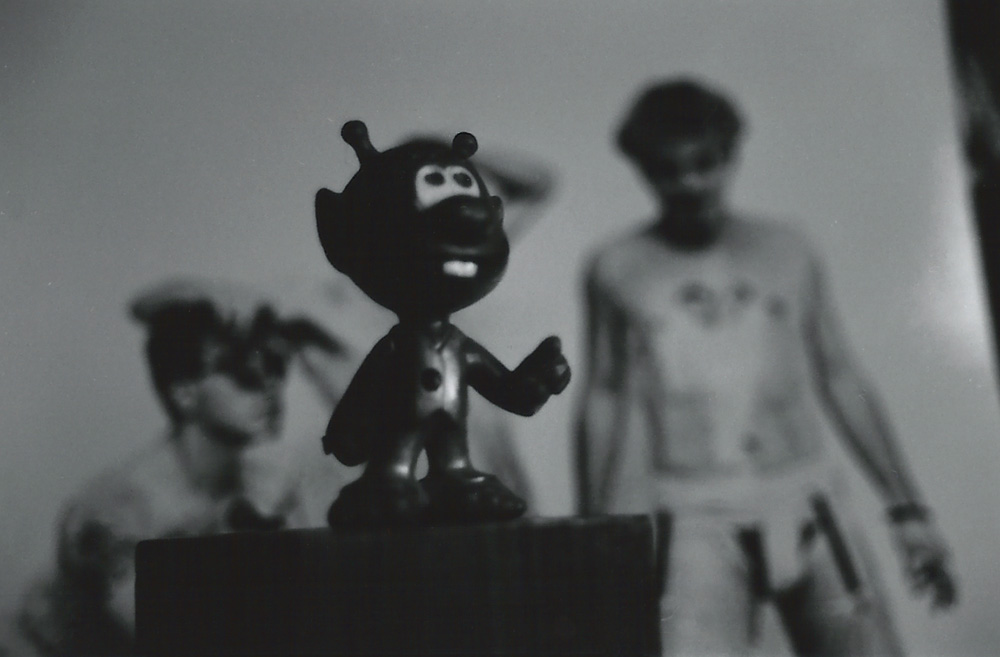 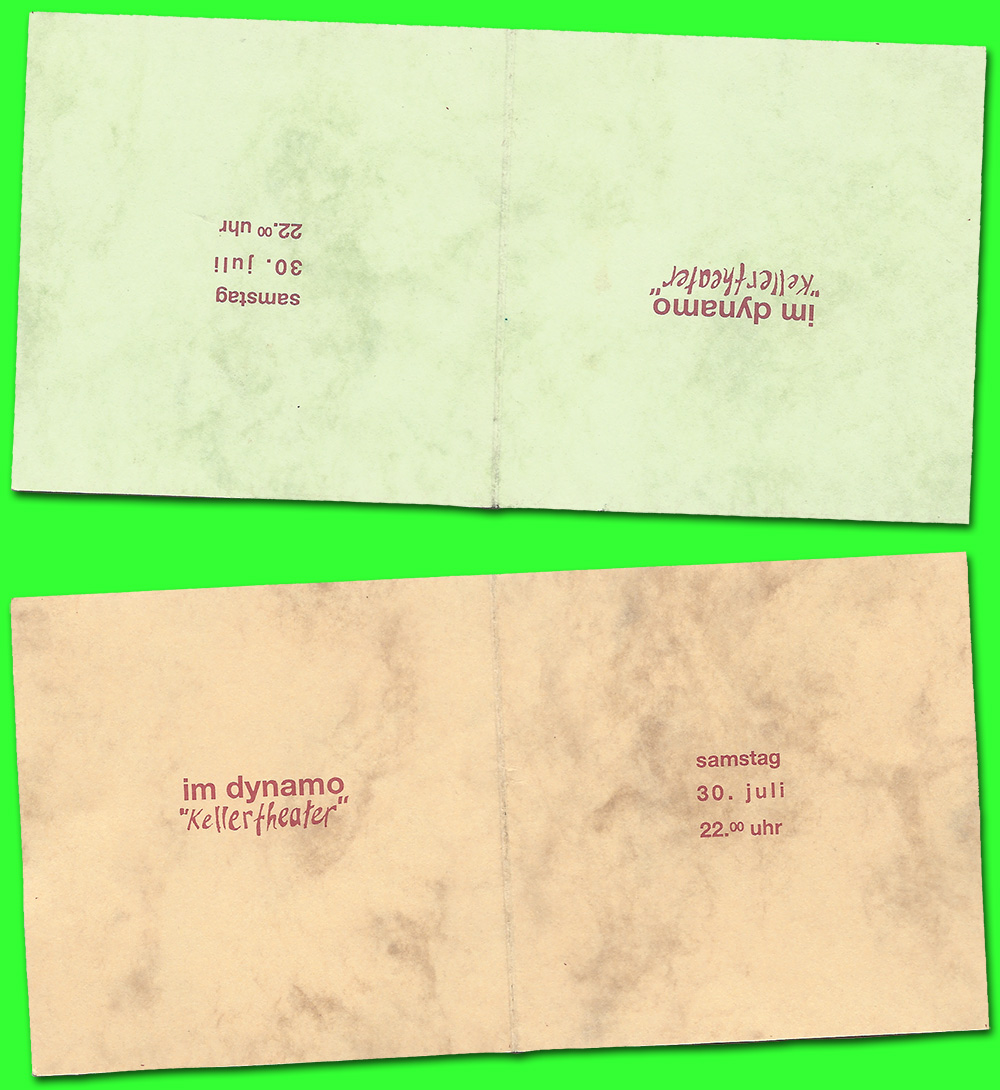 all flyer-art by oli rihs. 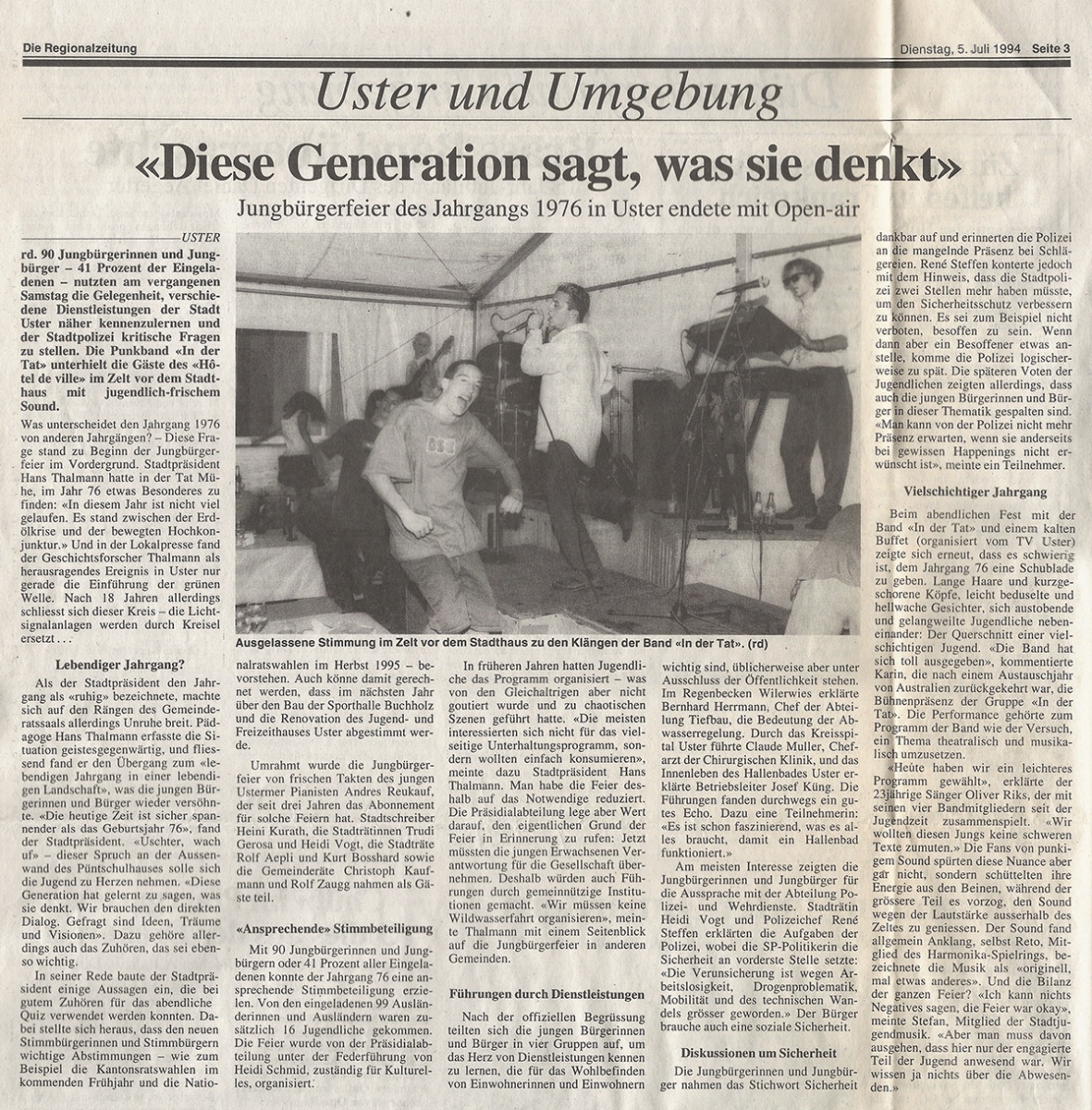 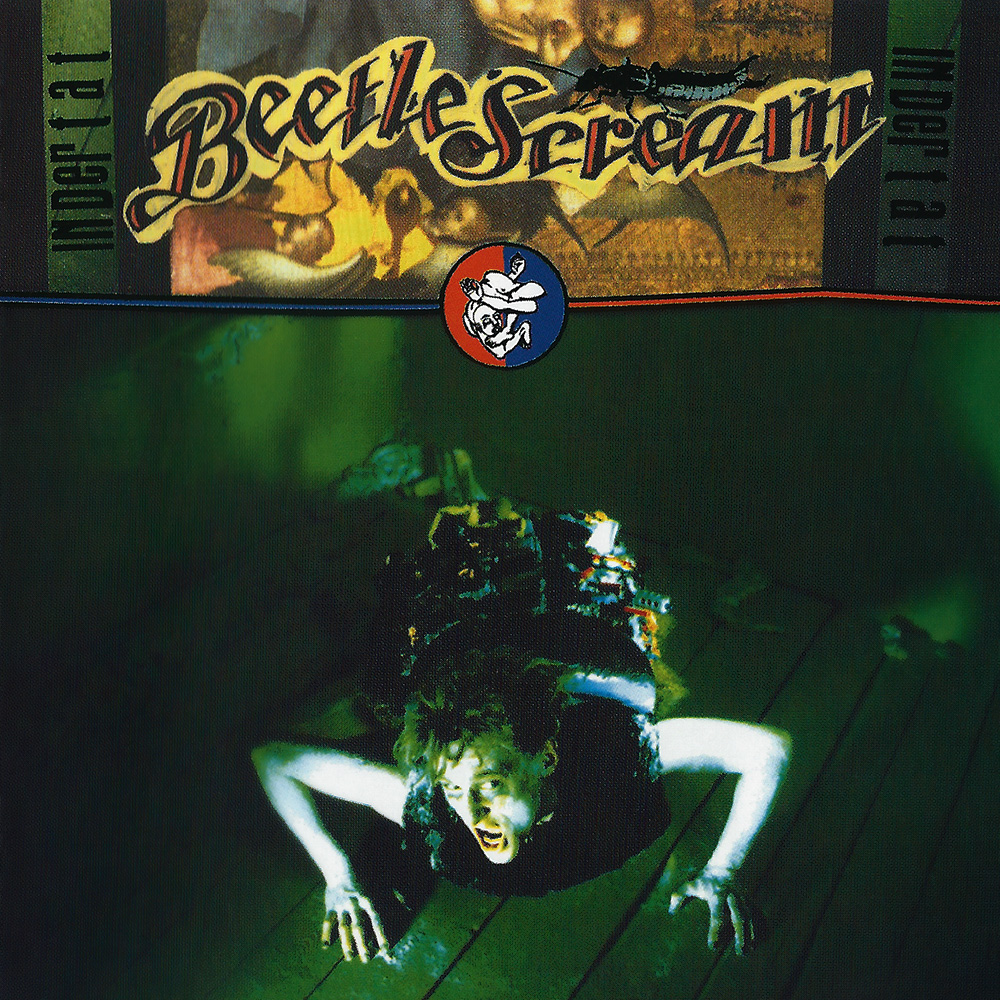