here you can see some of my javascript-exercises:

color-click : you have to match colors to the background and click the right swatch...

unfortunately the Balaflies broke up before we could record the many cover tunes mentioned below. pity, it would have been fun tweaking at some good recordings... another moment lost in time...

here's what we've been doing lately:
we have many cover tunes. here's some early tests... (and the playlist-code for balaflies!!!: :) more to come here soon:

t-ache celebrates randomness with mac logic, an express-1-2-test-song, which was mainly done to get to know how the new music-software logic works. git and vox were all done in one take. it's improvised randomness with mistakes and a little tweaking. it's the first experiment with a new mac and logic pro. creating music was never easier. :)

been creating a website for a painter artist. Looks kind of like my site... i'm still learning... as always and ever... ;)
there's some nice expressionist pictures to see... check it out. 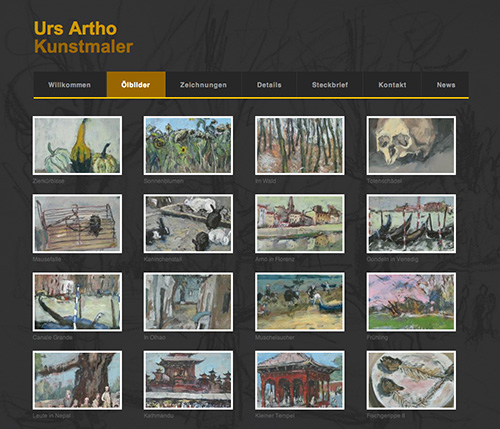